On a daily basis at radio 5NPY Umuwa our broadcasters/producers are presenting music programs, interviews, community service announcements and APY Land and beyond news bulletins.

Currently on our team of Community Mobile Reporters we have Sandra Ikungka Lewis of Ernabella and Willy Muntjantji Martin resident of Mimili, these community journalists deliver narratives and breaking news from their respective community using cutting edge iOS technology directly linking them back to the Umuwa studio.

Uwankara Palyanyku Kanyintjaku or UPK is our health and wellbeing program that looks into issues of spiritual, cultural and mental health nature for Anangu on the APY Lands. We also run a periodical bi-lingual current affairs program Uninpa Iwara which tackles the big issues for Anangu Pitjantjatjara Yankunytjatjara with Australian politicians, policy makers and community leaders.

We broadcast our signal to 7 communities and over an area of 120, 650 km2 to a population of about 2250 people however 5NPY is also streamed live on our website to enable world wide access. We perform live Outside Broadcasts (OBs) in the communities of the APY Lands and are getting ready to embark upon a new series of OB live music shows in order to build PY Media’s community profile and participation. We also provide support to communities in times of mourning to arrange and logistically support memorial services.

PY Media provides in house translation and recording services and is utilised by various branches of federal and state government, non-government agencies, state police and many others. Once again we are a growing presence on the Indigenous radio landscape in Australia.

A new series of narratives recorded by Bradley Roberts and Pin Rada for PY Media with APY Lands Elder Ginger Wikilyiri and Amos Frank about the construction of a traditional shelter.

Kupi-kupi (whirlwind) is the somewhat mystical and elusive being that travels the length and breadth of the APY Lands (and beyond) finding out and informing us of all  the positive stories that have been happening in education. Whether a student, class, or entire school endeavour – Kupi-kupi will be there and like a voice carried on the wind will spread the news across the land! 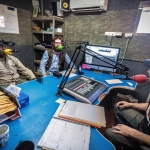 Listen to the rubbish show Wednesday’s at 12 pm as we explore the issue of waste management on the APY Lands. Guest speakers from various community organisations are joined by Thomas Holder for awareness building discussion on current waste management practices and issues.

These have been produced as part of an information campaign by PY Media and the South Australian Government Department of Planning, Transport and Infrastructure.