Pirate television studios began operating in Pukatja (Ernabella) and Yuendumu (NT) using basic domestic video cameras to record community events in 1983. It was filmed mostly in local languages and copied on to VHS tapes then broadcast locally within the community.

Rex Guthrie began using a video camera as an educational tool in Pukatja in 1982:

I started using video with the kids and we’d go around the community and film … I’d get the kids to do the camera work… and we’d record various things that happened in the community… I was using video just as a tool for them to learn English. That’s what it was about. It wasn’t about taking video … Also used it for numeracy, as well, in the same way … So we did some sort of counting or working out some simple mathematics using video … and put voice-overs onto it with a microphone and different kids and they would play it back and get the reward of seeing the images with the sound and their own voice doing the English. – Rex Guthrie, interviewed by Chris Guster
Chris Guster writes, ‘It was not long before members of the community saw the value of video technology. The video unit at Ernabella was brought into being in 1983 by local elder, Wally Dunn and Guthrie in his new role as Community Adult Educator. Dunn and Guthrie held a series of community meetings about the coming of satellite television. As a result of these meetings, ‘The Ernabella Video Project’ was formed with six local ‘video production trainees’: Wally Dunn, Colin Brown, Simon Tjiyangu, Pantjiti Tjiyangu, Sandra Lewis and Joseph Tapaya. The recordings heralded the birth of the community’s own local television station.

In November 1984 EVTV conducted its first test TV transmission and by April 1985 EVTV began regular television broadcasts. In its first year EVTV produced 17 productions including Bush Medicine and the re-enactment of the dreaming story The Seven Sisters.’ 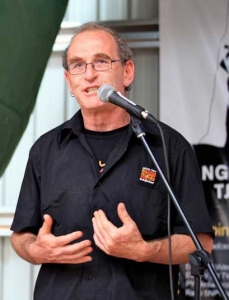 Neil Turner speaking at the National Remote Indigenous Media Festival at Umuwa in 2011.

Neil Turner took over in 1985 and worked with EVTV (now PY Media) until 1996 when he moved to Broome to manage Pilbara and Kimberly Aboriginal Media.

The original concept for the TV station in Ernabella was that it was a community participation model, that it wasn’t just the video crew who would run the service for the community, but the school, the health clinic, the police, the church, the footballers, everyone would get involved in contributing to the community programming, and the video production crew could go and record things with them if they didn’t have their own cameras, and so on. – Neil Turner

In 1997, EVTV’s video cassettes went to the South Australia Museum in Adelaide in an effort to catalogue and stabilise the collection. Kunmanara and Pantjiti Tjiyangu spent many hours reviewing the tapes and helped document valuable cultural information. PY Media Video Productions made it a priority to produce stable digital copies and maintain the database so that the archive could be returned to the people on the APY Lands. Ernabella Video Program TV it’s been good, so that people can come here and watch what program they want to see. And it’s been a big change since two years ago when it first started. And I believe that the Ernabella Video TV is going to go a long way so that other people can see and watch what is going on. Also they can keep to their own thing and what pictures to make and programs so that when the satellite TV comes there will be other changes. I believe that one day – especially with the Aboriginal people – when they got their own program they can see and put what’s on … that will be great help for the people up here, the north of South Australia. – Colin Brown talking about his work on the Ernabella Video Television (EVTV) project. Nganampa Tjukurpa Kanyini (Keeping our Story), Ernabella, South Australia, 1985.

‘Bush Medicine’ was the first production for EVTV shot in 1983. The production was contracted through the South Australian Film Corporation and provided EVTV with its first funds for equipment. Several productions have sold hundreds of copies to libraries, organizations and individuals around Australia and overseas. ‘The Seven Sisters Dreaming’ has been distributed to Australian Embassies all over the world.

I’d say it’s a very powerful tool. I think it’s really important, really relevant, you know, I’m glad I was involved in that. And it’s once in a lifetime … That will never be repeated again … the old people they’re going be passed on, they’re getting a lot older now, a lot of them are getting sick … so it’s really important, you know, it’s going to stay recorded the rest of the life. And I think the next, you know, the older people that have got it now … they got the knowledge in their head. When they’re gone they will take the knowledge with them. In 30 years time and 50 years time … EVTV is unique and it’s different – it was people that was together as one. That’s sort of like a family I’d say, really …

[EVTV] was really interesting … we went out bush and went out to the weir, went and done a lot of things and kept us really excited. It was good working behind the camera. – Colin Brown in 2010 reflecting on his time with EVTV.

We started making video in Fregon, by duplicating the video tapes that we shot. We were making two copies of the video cassettes in order to edit the images and distribute the tapes.

Fregon was the number two EVTV. Tjapukula George and I, together we were the camerapersons. We filmed in the bush, and in the cattle and camel yards of West Bore. There were lots of wild camels on the Lands. Those camels were mustered in the yards. Afterwards, those camels would be sold somewhere overseas. Besides camels, there were wild donkeys, and some quiet ones. Some camels were also quiet. We ran a good business in West Bore and Mulga Bore. We also had a large garden – orange trees, watermelon, rock melon, pumpkin, mulberry, lemon. We would harvest the fruit. Some of the produce would be sold.

We also filmed during the day and at night the dancing and singing for inma. Everybody would come to the Fregon community to get together for inma. Sometimes, CAAMA would come from Alice Springs and Adelaide with their big cameras to take pictures. We shot with smaller cameras. Eventually, EVTV had a big camera. Smaller cameras continued to be used in Fregon and Mimili.

Happy singing. Everybody, men and women and children, were very happy. We also filmed boys and girls who were doing inma together with the old fellas. Inmas would last for one week.

We would travel far away for inma in other places. We would travel from Fregon to Warburton in one night. From Warburton, we would travel to Kalgoorlie and then on to Perth. Inma Pulka (“big culture”) would bring people together for one week from all over Western Australia. When inma was finished, everybody went back to the communities. 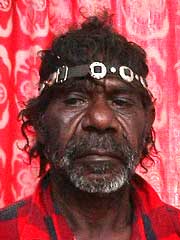 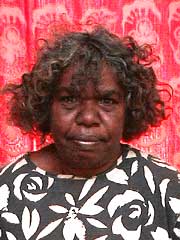 We trained for one year at Batchelor College in Darwin. For a long time we worked for no salary. Eventually, we were paid a small wage by CDEP (Community Development Employment Program). In the beginning, there was no support from ATSIC. Since there was no money for cameras, the first cameras were small amateur models. Over the years, we sold video cassettes to raise money, over $10,000, for EVTV. We built a small studio in Pukatja for video production.

We have made over two thousand videos over the years. Among them, we have produced the following: the Seven Sister ceremony, Baby Clinic, Woodcarving, Witchetty Grub, Honey Ants, Bush Medicine, and Bush Tucker. On one occasion, a group of white ladies visited the Land to learn something of our ceremonies. We shot a videotape that captured their experience. Women’s business is separate from other ceremonies. Pantjiti shoots women’s business.

There was a big Inma celebration in 1994 in Pukatja that EVTV sponsored. The whole community came together. Lots of people came. Men and women sang and danced. It was a time for teaching the children about inma. It was a very busy time for shooting video. Video cassettes were produced from this event and later sold.

EVTV has also sponsored Inma events in Adelaide. EVTV brought people from the communities to the city to share their culture, to perform traditional dances and songs. Our culture travels everywhere, to Perth, Adelaide, Sydney, Alice Springs, and then, through electronic media, around the world. 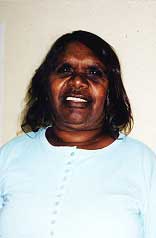