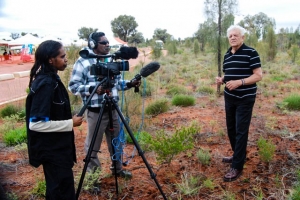 PY Media has recorded thousands of hours of video from the earliest days. Anangu have always seen the value of recording their own life activities especially when it reveals the traditional skills through song, dance and hunting. The PY Media archives are stacked with these recordings of inma performances in the grainy black and white video of the day, the early eighties, graduating to better quality with the advent of better funding.

Videoing inma, executive meetings, rock and roll concerts, excursions to the city and elsewhere and major events has always been regarded as important and essential to PY Media activity. For many years the PY Media has  strongly included video work and a video production unit has operated alongside the 5NPY radio broadcast identity. In 2012 funding of video was discontinued. It is hoped that video production can be reinstated.

‘Video’ is an essential part of ‘media’.

Check out our recent video productions here about waste management on the APY Lands. These in house videos were produced in conjunction with the South Australian Department of Planning, Transport and Infrastructure. Thanks to all organisations that supported PY Media and DPTI in this production.

Uwankara Kutju – Everything Is One from PY Media on Vimeo.

The Country Calls Back from PY Media on Vimeo.